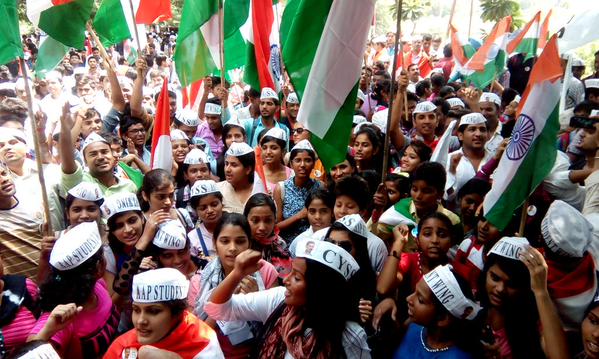 Neither a bill nor an institution can become strong just by calling it strong. Its only when you have surrendered all your wisdom to someone that their voice becomes your voice. I would never advice you to surrender your wisdom to me, but put up a few arguments in support of my claim.

Today, one of the strongest governments in Indian history, the AAP government in Delhi has passed one of the weakest Lokpal bills ever proposed. Ironically AAP is the party born out Jan Lokpal Movement, that has brought the entire country to streets demanding JanLokpal.

Regardless of the powers an institution has, what decides its strength is the way its appointment and expulsion is controlled. And this is not my argument alone. This is the same argument that all leaders of the JanLokpal movement including Delhi CM Mr Arvind Kejriwal have been offering. CBI has been labelled as a “Caged Parrot” by none other than honourable supreme court of India on the same grounds. The appointment and postings in CBI are controlled by central government. We have been fighting for years demanding independence of CBI and the independence refers to independence from political interference. Now the so called AAP Ka Strong Lokpal passed today by Delhi assembly is nothing but a puppet in the hands of politicians, largely the government in power.

Below are the specific points that make it a puppet and comparative clauses with other bills that make it the weakest lokpal ever in history.

3 of the 4 members are politicians and 2 from the ruling party. Additionally Section 3 (1) (b) makes it clear that “No appointment of the Chairperson or a member of the Janlokpal shall be invalid merely by reason of any vacancy in the Selection Committee.” With this clause the right to abstain from the selection process in protest is taken away. Even if the leader of opposition decides to abstain from selection process rest 3 can appoint the Lokpal.

All the other bills/acts listed above had the provision of a search panel comprising of eminent people who search for the best suitable candidates to be proposed to selection committee. This provision that existed even in the UPA Jokepal has been done away with simply to have the full control of selection process in the hands of selection committee dominated by politicians.

In all the other bills/acts the only process for removal of a Lokpal was through Supreme Court barring the Delhi Lokpal Bill in which it was through High Court. For the first time in the AAP Ka Strong Lokpal bill this power is handed over to assembly. The assembly can remove a Lokpal with 2/3rd majority. I the current Delhi Government lead by Mr Arvind Kejriwal, AAP has a strength of 67 MLAs out of 70.

What is achieved by having the AAP Ka Strong Lokpal? An institution that is completely in the glitches of current government, that would have Lokpals selected by politicians and the once who can be any time removed by the MLAs. Ironically the same people against whom the Lokpal is supposed to investigate and act.

As a supporter of a political party one may keep cheerleading the politicians and keep misleading people by calling it as AAP Ka Strong Lokpal but its high time we start thinking about the future of our nation. Abuses are welcome in comments.