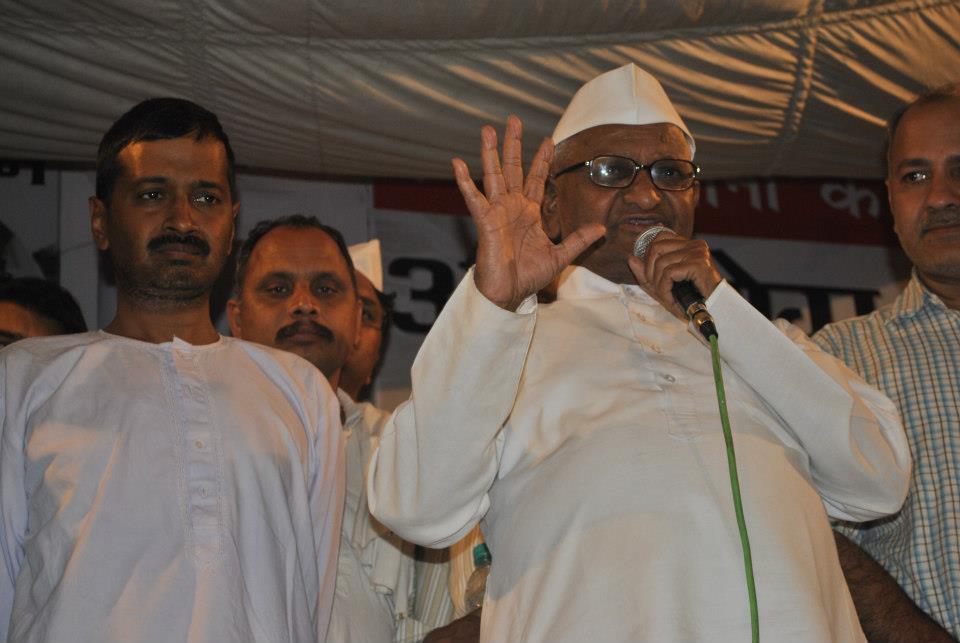 Anna is a fraud, Anna is RSS agent, Anna is Dhongi – these are few of the tweets mostly by the so called AAP supporters. Ironically AAP is the name of a political outfit born out of a nation wide agitation popularly known after Anna Hazare as Anna Andolan.

Why this outrage? Not that there has been some sting exposing Anna doing some deals with BJP or RSS, but because Anna spoke up against Delhi CM Arvind Kejriwal.

Rather than responding to Anna’s allegations the supporters find it easy to abuse Anna on social media. Nothing else can be said against a man of integrity like him so the abuses are justified by the same argument that right wing blind followers (popularly known as Bhakts) often use – “Where were you when…”

Why don’t you speak against Modi?

Basically the question is and some people frame it directly as “Why do speak only against Kejriwal?”

It’s apparent from the question itself that for these people the only source of information is the media reports that they see on their twitter timeline and they would remember only the ones that they find worth remembering.

So here are a few media reports where Anna has questioned/criticized Modi and BJP/RSS.

Anna hits out at PM Modi over Smart City Program

No VIsible difference in UPA 2 and Modi Govt over Corruption

This is not all. Those interested may make use of google to look for media reports where Anna would have slammed Modi/BJP/RSS or have praised Kejriwal.

Why don’t you demand Lokpal from Modi Government?

Again a few media reports for these people to read.

Anna warns Modi of another satyagrah over lokpal

Anna Hazare to start another agitation over lokpal

Again the list is far from complete and all the above links aren’t from same date. Take help of google and you to find numerous such links

Why don’t you start an agitation again?

Wow. These youngsters want this old man in his eighties to sit on an indefinite fast again. May be because they themselves aren’t young enough to launch some agitation again. Have they also lost the confidence in their supreme leader whom they credit for the popular IAC movement. The same people are often seen saying that Anna was just a face projected by their supreme leader. Why not ask your Messiah to launch the agitation again may be with some other face?

Anyways what could this helpless  old man do now? helpless because the youth that supported him has now turned into blind supporters of two political leaders. Sunil Lal, the man behind branding of IAC movement has been working hard for last 2 years to revive the India Against Corruption. His mails and posters must have reached all these supporters too. But then they are blind. He has been working with Anna Hazare on several other issues like electoral reforms. For further information that you may not get on the media you may go through his Facebook profile or the facebook page of IAC.

Until now I just spoke on media reports. But isn’t the media biased? That’s what these same people are damn sure about. Aren’t these people often seen saying that the media is biased against Kejriwal and selectively reports negative news about him? But when it comes to Anna Hazare they would conveniently forget that media may not take his views on Modi and even if they take they may not publicize it.

Anna Hazare has earned this reputation with his selfless devotion of the entire life for this nation. He isn’t an intellectual, he isn’t a politician. He is a man of conviction who has risked his life several times with a hope that he can leave a better India for the next generations. Factually all the youth support base (that’s crucial for a nation wide movement) has metamorphosed into blind supporters of one or other politician. He will have to wait for the next generation to begin his agitation again and I am afraid he may not survive by then. I have wasted 4 crucial years of my career simply believing that this old man can make a difference for the generations to come. It did not work out. But still I hold this man at the highest regards for his selfless efforts. At least he did something, I couldn’t have done.

Very few of you would have read up to this. If interested read about Anna Hazare on wikipedia.